The Legend of Barahona

9 years 2 months ago #1 by Grupo Alpha
The Legend of Barahona was created by Grupo Alpha
The truth is that we are interested primarily Barahona two things but to be honest the condition in which they were greatly disappoint us. Barahona is a small village south of the province of Soria, Guadalajara limiting. Several developments attest to that tradition in Barahona brujesca not just a legend, because the town is gathered by the Inquisition in 1527 as a hotbed of witchcraft and covens. Witness to this is the Mojon-Confessional de las Brujas (Witches' Stone), a rock pierced by a hole and whose top is a cross engraved (now almost negligible). Supposedly, witches stuck their head in the hole to confess their misdeeds to the devil.
The other point of interest we had heard of the Alpha Group members wanted to know, were the famous "Wells Aironet," also identified with witchcraft. In themselves, are holes in the earth capable of swallowing large amounts of water, so that all the ditches in the area are going to give this place, using as a sink. Legend has it that the described holes were made by the witches repeatedly hitting the ground with her ass. We do have to warn you that currently have no relevance and its condition is just truly awful. As mentioned, Barahona in that regard may disappoint us a bit, if you ever pass by there if it's worth Pareis you to talk with the friendly locals, the rest for a park of witches and enjoying the peace paseéis and tranquility in these beautiful lands, but we can not from here, much less to recommend travel there "only" for two "monuments" as in the one case as in the other, its sad condition, and poor signage area, do not do exactly easy to find and not too interesting. However we show here a picture of the "Witches Stone" and a link to the website of the region. From the "Well Aironet" not even any pictures we took because we understood that it deserved. Slap on the wrist with all our affection for the municipality of the area, truly a shame ... 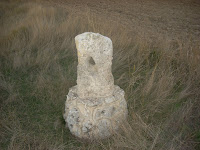 The famous Stone of Las Brujas and barely shows a significant symbol, erosion and lack preservation have wreaked havoc over time. 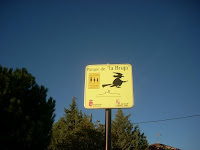 In the center of town you will see this curious sign indicates the location of a park ideal for a break.

The Web in the area: